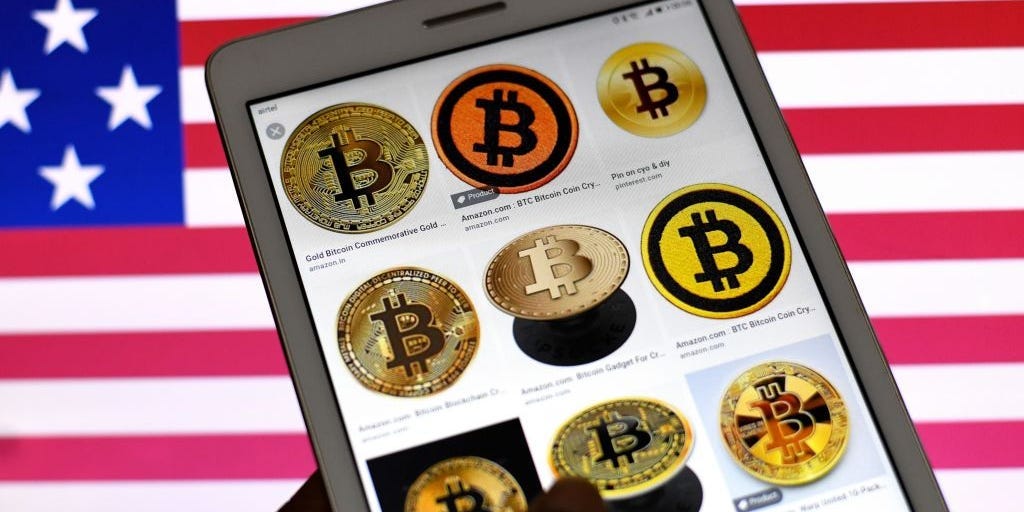 Welcome back to 10 Things in Politics. Sign up here to receive this newsletter. Plus, download Insider’s app for news on the go — click here for iOS and here for Android. Send tips to bgriffiths@insider.com.

Here’s what we’re talking about:

1. ON THE CAMPAIGN TRAIL: Politicians are cashing in on the crypto boom. A growing number of candidates and political groups are interested in accepting bitcoin and altcoins. The only problem is that federal law in this area leaves a lot of open questions.

Here’s what you need to know:

Campaigns can legally accept bitcoin: The Federal Election Commission, the agency tasked with overseeing federal elections, established this right in 2014. But its guidance on the subject leaves a lot of ambiguity, including over whether campaigns can use cryptocurrency to buy goods and services and whether it’s legal to accept more than $100 worth of bitcoin. To further complicate matters, the guidance is so outdated that it applies only to bitcoin, not any of the many other cryptocurrencies like dogecoin.

Politicians are moving ahead anyway: The NRCC, House Republicans’ campaign arm, became the first national party committee to accept crypto. It is able to get around the $100 question by converting any crypto donations into cash before it hits its account.

Read more about how Washington is getting into crypto, including how every lawmaker has already received $50 worth of bitcoin.

2. Hundreds of thousands of US troops are not fully vaccinated: Sizable portions of the military are not vaccinated even as deadlines approach for the Pentagon’s COVID-19 vaccine mandate, The Washington Post reports. The vaccination rate varies within different branches and military segments. The Post, for example, found 90% of the active-duty Navy was fully vaccinated but just 72% of the Marine Corps was. The reserves and the National Guard have large numbers of unvaccinated troops. Officials say part of the delay is due to different deadlines for the services. More on the concerns about how the lagging vaccination rates will affect troop readiness.

3. Taliban says US will provide humanitarian aid to Afghans: The Taliban made the claim after the first direct talks between the US and the militants since American forces withdrew, the Associated Press reports. The US appeared to confirm only that humanitarian aid had been discussed. The US is also yet to recognize the Taliban as the legitimate leaders of Afghanistan. Here’s where things stand as the two sides grapple with Afghanistan’s future.

4. High-ranking House Republican refuses to say Trump lost: House Minority Whip Steve Scalise, the No. 2 House Republican, refused to say Joe Biden fairly won the 2020 US presidential election almost a year after it took place. Fox News’ Chris Wallace repeatedly pressed Scalise on whether he believed Donald Trump’s baseless claims of widespread voter fraud. Scalise refused to give a direct answer. More on what this means for the state of the GOP.

5. Southwest cancels more than 1,000 flights: The airline had canceled nearly a third of its daily schedule as of early last night, the highest rate of any major US airline, the Associated Press reports. Southwest cited air-traffic-control issues and weather delays, but analysts are speculating about other possibilities, including that the airline might’ve scheduled too many flights and that some pilots were protesting the company’s COVID-19 vaccine mandate. The union representing Southwest pilots, which is suing the airline over its pandemic policies, denied pilots were staging a protest. More on what the fallout may be for a major airline.

6. Fauci says Americans should enjoy trick-or-treating: Dr. Anthony Fauci on Sunday said COVID-19 cases in the US were headed in the “right direction” and Americans should feel free to enjoy outdoor Halloween festivities like trick-or-treating. He also cautioned against prematurely declaring victory over the pandemic, however, noting that past surges had sprung up after relative lulls. More on what Fauci thinks about where things stand.

7. Prosecutors say a Navy nuclear engineer tried to pass secrets via a sandwich: Jonathan Toebbe is accused of attempting to sell classified data about nuclear submarines to someone he thought was a foreign agent — by popping the intel into an SD card and slotting it into a peanut-butter sandwich. “I believe this information will be of great value to your nation. This is not a hoax,” prosecutors say Toebbe wrote in one message to someone he thought was a foreign intelligence agent. Instead, the FBI was on the receiving end. More on the wild details of the espionage-related charges.

8. Police arrest three men after a deadly St. Paul shooting: Officers found 15 people injured when they responded to what was described as a “hellish” scene at a bar in Minnesota early Sunday morning. Fourteen people were sent to nearby hospitals, and a woman described to be in her 20s died. Here’s the latest.

9. Ivanka Trump nearly led the World Bank, report says: Donald Trump wanted to name his daughter to lead the World Bank in 2019, but then-Treasury Secretary Steven Mnuchin intervened to block the appointment, The Intercept reports. “It came incredibly close to happening,” a source told the publication. More on the episode.

10. The popularity of “Squid Game” has stunned Hollywood: The South Korean series has become extraordinarily popular, reaching No. 1 in 90 countries in 10 days, and

Netflix
co-CEO Ted Sarandos said early on that it was likely to unseat “Bridgerton” as the streamer’s all-time most popular series. Netflix did little to market the show outside Asia, relying on its recommendation engine, social media, and word of mouth to get audiences to watch what has become a worldwide hit. Read more about how “Squid Game” is spawning memes and increased costume sales.

Today’s trivia question: Today marks the anniversary of when former President Jimmy Carter won the Nobel Peace Prize. Who was the first president to win the high honor? (ICYMI: This year’s prize went to two outspoken critical journalists from the Philippines and Russia.) bgriffiths@insider.com.

Next post Legendary investor Bill Miller touts bitcoin, says Coinbase could rival Tesla in value, and compares his crypto wager to his Amazon bet in a new interview. Here are the 10 best quotes.