According to a recent press release on Tuesday, Bullish Global is a “blockchain-based cryptocurrency exchange designed to combine the performance, user privacy, and compliance offered by central order book technology with the vertically integrated user benefits of decentralized finance (DeFi) market architecture.”

The cryptocurrency exchange is set to launch this year and will utilize the EOSIO and EOS Public Blockchain.

Bullish will focus on bridging the gap between institutional investors and the crypto space, according to comments from the British billionaire hedge fund manager and Bullish Global investor Alan Howard.

“Successfully bridging the gap between digital assets and institutional actors will shape the future of the financial sector as we witness greater mainstream adoption of digital currencies,” Howard said in a press release.

“I am excited about being involved with Bullish’s mission to give its users more value-added control over their financial future,” he added.

The platform will provide both institutional and retail investors market-making, lending, and portfolio management services in a DeFi (decentralized finance) app without the use of banks as middlemen.

The funding includes 164,000 Bitcoin valued at around $9.7 billion, $100 million in cash, and 20 million EOS tokens, which power Block.one transactions. An additional funding round raised another $300 million for the operation as well.

Peter Thiel, Alan Howard, Richard Li, and Christian Angermayer will also serve as senior advisors to the company as a part of the deal.

Commenting on the new crypto exchange, Peter Thiel said “Bullish’s balance sheet is strong, and its vertical integration offers stability and liquidity to the cryptocurrency space.”

“I’m happy to join Bullish as an investor and advisor as it gets started on a long and fruitful journey,” Thiel added.

Galaxy Digital’s Mike Novogratz said he was also “excited” for what Bullish Global can bring to the crypto space.

“Bullish’s sheer size and scale combined with Block.one’s experience in high-performance blockchain engineering will make Bullish a formidable player from day one. I’m excited to be on the journey with this team,” Novogratz said.

Block.one has faced headwinds since it ran the world’s biggest ICO netting $4 billion back in 2018.

The company was forced to pay a $24 million settlement to the Securities and Exchange Commission in 2019 to resolve allegations of conducting an unregistered initial coin offering.

Block.one platform has also seen declining developer interest of late, according to a report from Electric Capital, per Bloomberg.

The new deal should help to revitalize Peter Thiel’s blockchain startup and position it to take advantage of growing institutional interest in cryptocurrencies. 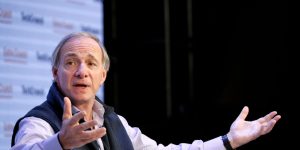