RALEIGH — Since launching in 2018, Kaleido’s cross-cloud platform has been deployed in a range of industries generating more than 1 billion blocks mined on the Ethereum blockchain, according to the firm.

Headquartered out of Raleigh Founded’s Capital Club on West Martin Street, its founders say Kaleido is growing at an astonishingly clip – “around “3-5X, depending on market segment” – though they remain tightlipped on exact numbers.

It’s doing so well that it can even afford to give away some of its assets. (It open sourced a product called Firefly, a multi-party system for enterprise data flows, a few months back.)

WRAL TechWire’s Chantal Allam recently had the chance to chat with them at their headquarters at Raleigh Founded. Here’s what they had to say:

TechWire: Take me to the beginning on how it all got started.

Sophia: Steve and I worked together at IBM, and we were early in the enterprise blockchain space. We led the efforts there. We saw a need in the market for different types of products that cloud vendors weren’t building. So we left to start Kaleido. One of the seed investors is the co-founder of Ethereum, Joe Lubin. He founded as a venture studio to incubate and spin out companies such as Kaleido). We started right here at Raleigh Founded in November 2017.

Steve: On a higher level, bitcoin was the first thing going on in the market around 2010. Then around 2015, there was a second generation, which was Ethereum. That brought smart contracts into blockchains, and that’s when the enterprise world looked at the technology and said, “This is interesting, this could actually be useful to help us solve some age-old problems that we have around how we share data, and how we collaborate with other organizations.”

No company exists in a vacuum. Every company has a network of partners, and important data is flowing all the time. Those systems are legacy, so blockchain is a breakthrough technology to help rebuild all that valuable infrastructure. That’s where we came into the equation, and Kaleido followed in 2017. TechWire: You came out of the accelerator ConsenSys. How did that come about?

Sophia: Kaleido functioned as a separate business unit inside the ConsenSys venture studio model until Kaleido spun out April 2020 as a Delaware C Corporation.

TechWire: How much did you initially raise from ConsenSys?

Sophia: Right now, we’re still private. We’re just 23 people so we haven’t released our financials to people yet. ConsenSys led our seed round and they are one of the most active investors in the blockchain space. Details of the deal weren’t disclosed at the time. Going forward we’re looking at add more investors – and there will be some public information coming out, stay tuned!

TechWire: What does enterprise blockchain mean?

Sophia: Blockchain is a technology distributed ledger, so everyone gets a shared version of the truth or shared view of the data. It can be used for cryptocurrency, which is the bitcoin example. But you can transfer anything of value on a blockchain.

Enterprise blockchain is bringing a group of companies together in a multi-party system. Anything as simple as getting money from an ATM, booking an airplane ticket or just anything we want to do that just hits their backend databases and systems, you could look at as a good-use case. Blockchain helps these companies get value from a more real-time view of shared data set. They can now provide a better service in terms of speed, cost or accuracy.

TechWire: In 2018, you secured a partnership with Amazon Web Services (AWS) to released what you called the “first Blockchain-as-a-Service” subscription plan to provide their customers with an “easy button” to use blockchain. What exactly does Kaleido’s platform do?

Sophia: There really was nothing else in the market that helps multiple companies come together, put their data on the ledger and just start working together easily. We provide all the components to do that as a service running on the cloud, but it can run on multiple clouds. People can decide where they want to run their data, and what they own.

Of course, it’s software-as-a-service so we run, operate, maintain the system, as well. It makes things a lot easier for them to get into these new solutions. They choose the components they need like Lego blocks, and we run that for them. It’s predictable costs and service levels, and there’s no barrier to entry, even for the smallest companies. We have some really innovative startups who have built on us because they can punch above their weight class.

TechWire: What’s the current status of your relationship with AWS?

Sophia: We’re really close partners. When they have clients who need more sophisticated capabilities to move into production; then they send them over to us. They’ve sent us large government agencies and other serious clients, so we have a good collaboration with them.

TechWire: How did you land that deal?

Sophia: We reach out to them. We’d been in the industry for almost three years by that point. We’d run into their representatives at events. One was a woman who was very forward looking and a great advocate on the Amazon side. That gave us a good line of sight into the industry, and who the main players were.

At the time, Amazon had no interest on the organic side to do anything in blockchain space. But the leader of their partner organization felt differently. So we started working together with some client networks that were running on Kaleido, and then the general manager of Amazon was on stage with us announcing the partnership. It was a win-win for both parties.

TechWire: In June, you released FireFly, what you call the first open source multi-party system.

Steve: We believe with Firefly that there’s a second generation of the enterprise blockchain tech where the barrier to building. At the end of the day, people want to build apps to do things, and enterprises are no different. And so the, the barrier to doing that is coming down by a couple orders of magnitude. Now we’re seeing companies move a lot faster and a big acceleration in the space.

TechWire: Why did you open source Firefly?

Sophia: We see a lot of repeatable patterns. We thought, if we could build the right system, people, industries governments can take advantage of blockchain much faster and accelerate getting to the real benefits. It’s that versus just getting stuck in this like technology discussion for years and years where maybe all the like consultants make all the money but the companies themselves and the end users aren’t seeing the benefits of it.

TechWire: How is blockchain going to affect everyday person on the street?

Steve: There’s just value that is trapped in fragile value chains, supply chains, partner networks, payment networks, cross-border flows, healthcare records. For the average consumer, companies are getting more efficient with the services that they provide in competitive markets, and no one wants to be left behind. Companies are getting together to build industry platforms, and to build new applications on top of those, and that’s kind of what’s going on in the enterprise world, and it’s a big shift for enterprises.

TechWire: Can you give me an example of how your platform is being used?

Sophia: There’s Project i2i – a UnionBank and Kaleido project in the Phillipines. It’s a payment network built on Ethereum which connects rural community banks in the Philippines, successfully grew its network from 6 participating banks to a network of 400 rural banks and 2,600 branches in the region. Leveraging Kaleido’s spectrum of blockchain capabilities will allow the diverse partners within i2i to scale together.

TechWire: Despite COVID-19, how quickly are you growing?

Sophia: We’re growing at a rate of 3-5X depending on how you segment the revenue between product and services.

Steve: We’re definitely growing. Like a lot of startups, COVID-19 was an interesting, unexpected curveball. But what our clients have told us is that COVID-19 was an impetus for them to really accelerate their digital transformation roadmap. If you’re thinking about it from a company’s perspective, blockchain really fits under that digital transformation umbrella. What we’re seeing is a big acceleration. Our revenues are grown several multiples of over the last year, and we’re see that going forward as well.

Sophia: It’s really a once in a generation shift from how they’re doing business before.

TechWire: Why did you pick Raleigh for Kaleido’s headquarters?

Sophia: When we were looking at locations, we looked at Durham; then we looked here. We saw Pendo started at Raleigh Founded, and now they have their own building going up. We thought, It would be great have like Kaleido in the skyline of Raleigh too.

TechWire: You’ve got a range of clients, including individual developers. Tell us about your “free” starter kit.

Sophia: We have a free trial called the Starter Plan. Someone who’s just an individual developer could come to our platform. We’ve got 500 APIs, and they can just start building stuff. We’ve got 1000s of those sorts of networks, just developers who might be in an emerging tech team or innovation lab at a company, or they’re a startup with great idea. Every week we get these encounters with people who are coming up with amazing ways to use the platform.

TechWire: Are you planning a raise?

Sophia: We’re in a good position. During COVID-19, we’ve been cashflow positive. We don’t need to do a raise, but we’re are looking closely in terms of use of funds and scaling rapidly to maintain our very strong growth during COVID-19. We’ve certainly had a lot of people reaching out to us, from small to large.

We are laser focused on growth and leaning into this huge shift in enterprise data sharing.  We are always looking at our capital needs to achieve and maintain hyper growth.

TechWire: You’re not looking to exit, are you?

TechWire: Are you averse to being called a “unicorn”?

Sophia: No, no, it’s great. Part of having careers in enterprise IT is the excitement of building something and seeing it grow through all the phases, all the way to going public. It’s part of why we’re doing this. It’s not just a quick way to get some cash and exit out.

We’re just really swinging for the fences. We’d like to build a big, worldwide, corporation here. We already have a great global footprint of clients and projects worldwide, so it’s just growing and scaling the team and business from here.

TechWire: When do hope to hit that mark? Have you plotted it out yet?

Sophia: I think a lot of times it’s the market itself that’s going to dictate. You can have a great product-market fit, a great team. But it depends on projections for how quickly the market is going to achieve total addressable size. 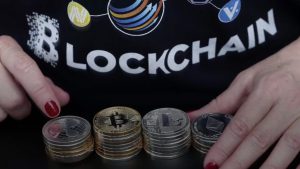 PRESS RELEASE. NFTs are all the rage right now – they are essentially unique units of data that generally represent...

Jaime Rogozinski says the erection of Harambe opposite the Wall Street bull was a powerful symbol.  He's taking to the...

$1 Billion Science Fund to Use Blockchain Projects to Extend Human Lifespan If you ever thought that living over a...