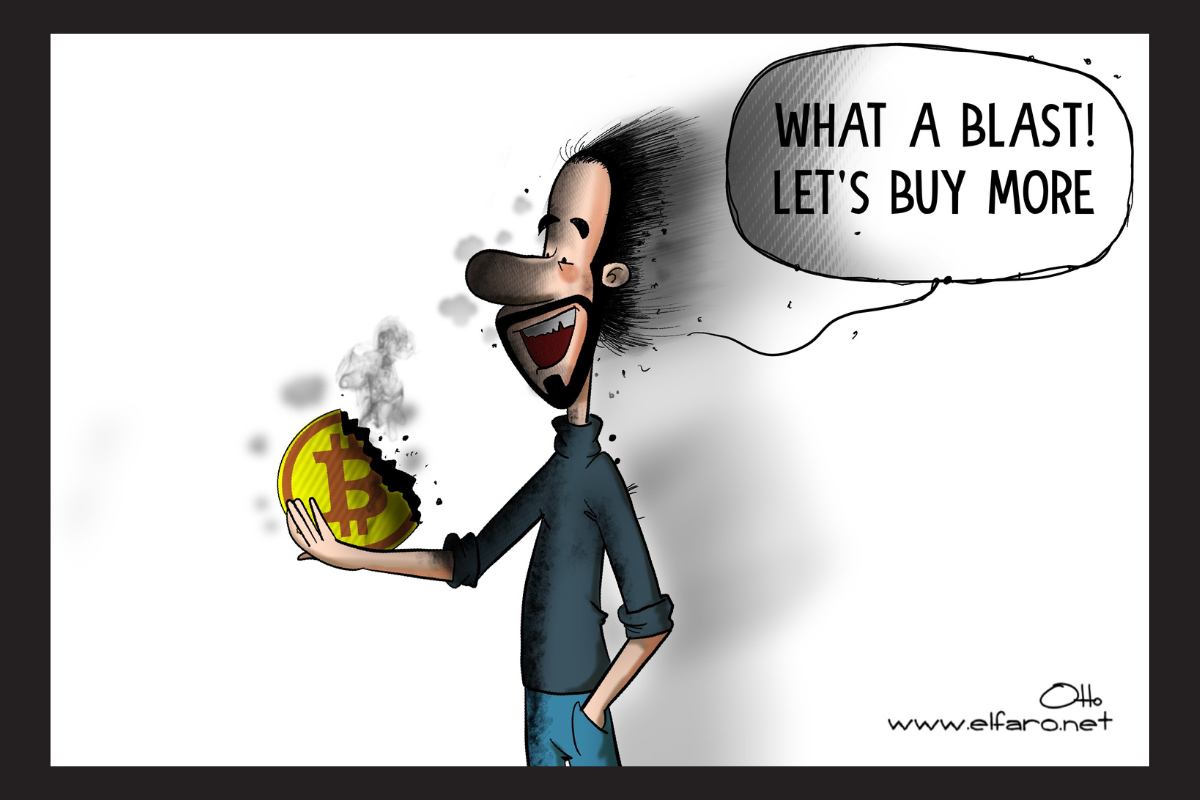 Welcome back. How are you liking our new podcast, El Faro English Audio? Find it here and let us know at english@elfaro.net. Today’s newsletter was written by Roman Gressier and edited by José Luis Sanz.

El Salvador, in Brief: Global financial duress is pummeling cryptocurrencies including Tether, an important piece of Nayib Bukele’s bitcoin project. One year into the Bitcoin Law, most Salvadorans say its benefits have been minimal, the government keeps related spending a closely guarded secret, and its bitcoin portfolio has lost $57M in taxpayer money. The president calls for patience.

Hold on for Dear Life

With inflation in a post-pandemic fever pitch and international markets engulfed in Ukraine-related turmoil, hedge funds and other deep-pocketed investors are dumping risky investments. One of the first assets to be cut has been crypto, the Wall Street Journal reports, leading to plunging trade values and the implosion of digital coins Terra and Luna.

Many believe that only the strongest crypto, like bitcoin and Ethereum, will survive the economic turmoil and specter of potentially ruinous future U.S. financial regulations. But for now, both have been dragged down by the crash. After peaking at almost $70,000 eight months ago, bitcoin was trading at under $21,000 on Monday.

If El Salvador has bought as much bitcoin as President Nayib Bukele claims, its initial investment of $103 million would have lost roughly 55 percent of its value. The losses accentuate the country’s urgent debt crisis, as we discussed a month ago, when the flagship cryptocurrency was worth $10 grand more than it is now.

Aware of those who follow the falling price of bitcoin like a political horse race, Bukele always doubles down.

“I see some are worried about the market price of bitcoin,” he tweeted on Saturday, the day it dipped below $18,000. “My advice: stop looking at the chart and enjoy life. (…) Patience is key.”

I see that some people are worried or anxious about the #Bitcoin market price.

My advice: stop looking at the graph and enjoy life. If you invested in #BTC your investment is safe and its value will immensely grow after the bear market.

Patience is the key.

The country has more reason to worry about Tether, a dollar-valued currency that acts as a vital trading bridge between cash and crypto and is staving off financial ruin. Bukele hired the company behind the token, Bitfinex, to issue $1 billion in bonds to finance his government. Bukele hasn’t dared take the bonds to market in the middle of the storm, but if Tether goes under, it could send the administration back to the drawing board.

Supposed to be the symbol of Bukele’s global audacity, bitcoin appears to have become a sore spot. The government still names it as a key factor in the attraction of $1.2 billion in U.S. investment in luxury hotels. The administration says 50 crypto companies have set up shop in the country, generating over 500 jobs.

It’s unclear how these numbers will hold up as the industry collapses, but more importantly, the foreign investment argument seems not to have convinced the public. In May 71 percent of Salvadorans reported that the Bitcoin Law had brought them no economic benefit. Another 22 percent said there had been little or some effect.

Maybe that’s why this month the administration avoided mentioning the Bitcoin Law both in the president’s state-of-the-nation speech and Foreign Minister Alexandra Hill’s remarks at the Summit of the Americas.

This is what we are fighting for 🇸🇻

We Don’t Talk About Chivo

Opacity has been a throughline since the Bitcoin Law was fast-tracked through the legislature in June 2021 without public debate. Leading the rollout are unofficial figureheads including the president’s brothers and a parallel cabinet of Venezuelans.

With public information mechanisms dismantled by Bukele, it’s unclear what has become of the $200 million allocated to finance the implementation. That includes $30 million allotted to promote the use of Chivo, a digital government bitcoin wallet and exchange hobbled since its September release by bugs, identity thieves, and scammers.

The president hasn’t tweeted about Chivo since March. Perhaps that’s due to the fact that four in five Salvadorans stopped using the app after claiming the free government incentive of $30 in bitcoin.

It also failed to become a disruptive remittance platform. 98 percent of users in the Salvadoran diaspora continue sending them home by traditional channels, and while the remaining two percent use digital wallets like Chivo, the Central Reserve Bank has not said how much of that traffic goes through the government app.

It’s not even clear how much bitcoin the administration has really bought. El Faro published records last September showing that the state-owned company behind Chivo Wallet had been cleared to purchase $60 million in bitcoin through a broker in Gibraltar.

Treasury Minister Alejandro Zelaya added confusion to the opacity last week when he said, after monthslong insistence to the contrary, that the administration had indeed sold bitcoin, trading it amid a record-setting price spike at the end of last year to pay for Chivo Pets, a lavish animal hospital offering ambulance service for cats and dogs in a country lacking broad access to basic health services.

Adding to the mess, Treasury documents show that the hospital was at least partially financed through the same company behind Chivo Wallet, with public debt.

This could be a good time to revisit El Faro’s interview with Johns Hopkins economist Steve Hanke last August, titled: “You’d have to be insane to introduce bitcoin into an environment that’s already corrupt.”

Thanks for reading. Before we go: Please share this newsletter to help our community grow, and consider funding El Faro’s uncensored journalism at support.elfaro.net.

Zilliqa (ZIL) has been relatively average in terms of volatility when compared to other cryptocurrencies. So far Tuesday, the Distributed...

IG Gold (IGG) has been relatively more volatile compared to the crypto market. So far Tuesday, the crypto has added...

Tripio (TRIO) has been relatively more volatile when compared to other cryptocurrencies. So far Tuesday, the crypto has advanced 1.92%...

Bitcoin BTC/USD saw one of its worst-performing months on record in June, along with a mass exodus of retail traders.What...