This Friday’s inaugural Texas Blockchain Summit in Austin could be a watershed event for making Texas “the jurisdiction of choice” for Bitcoin and other digital currencies. Lee Bratcher, president of the Texas Blockchain Council, will host a wide array of speakers including Texas Senators John Cornyn and Ted Cruz and Wyoming Senator Cynthia Lummis.

“This conference is the culmination of years of policy work in Texas that started in early 2019 when Representative Parker filed the first Blockchain Work Group bill,” Bratcher said in a statement. “At the Texas Blockchain Council, we believe that Texas can lead the world in establishing a climate of innovation around blockchain technology.”

From Bitcoin mining to U.S. sovereignty to national security

Forbes Magazine says it “could prove to be the largest state-level blockchain one-day summit ever.”

“We’re in a unique moment in the history of human societies,” said Natalie Smolenski, chairman of the board of the Texas Blockchain Council, in the statement. “For the first time, we have a form of sound money that is not issued by any nation-state. This has profound implications for political economy that the brilliant minds attending the Texas Blockchain Summit intend to explore.”

The summit will be held Friday in Austin from 8 a.m. to 5:30 p.m. General admission tickets are $435. More info is available here.

In July, Dallas Innovates wrote about Bratcher’s plans for the summit and Texas’ growing power in the blockchain and cryptocurrency landscape. He said two bills that passed in the Texas Legislature in the last session were game-changing.

“HB 1576 establishes a blockchain working group for the State of Texas for the purpose of producing recommendations to the Legislature and the Governor’s office on ways in which the state should be utilizing and investing in blockchain,” Bratcher explained.

“HB 4474 makes Texas the second state in the country to define, for the purpose of business law, what a virtual currency is and how a security interest in a crypto currency can be perfected. This puts Texas on par with Wyoming as far as friendly jurisdictions for blockchain and cryptocurrency.”

Governor Abbott is a supporter as well

Governor Abbott signed both bills into law, and has said “Texas will be the crypto leader.”

“Furthermore, the Texas Department of Banking has issued guidance that Texas chartered banks can custody digital assets,” Bratcher told us earlier this summer. “This means that your bank, assuming the proper procedures are followed to confirm to existing regulatory guidance, can custody your Bitcoin, Ether, tokenized real estate, or other digital asset. This is big news for industry.”

Sign up to keep your eye on what’s new and next in Dallas-Fort Worth, every day. 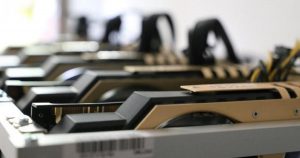 Next post (RIOT), Bitcoin – United States Dollar (CRYPTO:$BTC) – If You Invested $1,000 In Riot Blockchain Stock One Year Ago, Here’s How Much You’d Have Now

Ubisoft just concluded its Q2 earnings call, a strange event where relatively-okay financial numbers were overshadowed by the company being...

Opinions expressed are solely those of the author and do not reflect the views of Rolling Stone editors or publishers....

The EU announced IOTA as one of seven cryptocurrencies chosen for the development of the European blockchain project. IOTA recently...